Congratulations to Thomas and Janet Carper

Starting in 1967 Mr. Carper taught at the University of Southern Maine for over 30 years. While working in his career he wrote three books of poetry, including the following: Fiddle Lane in 1991, From Nature in 1995, Distant Blue in 2003 which won the Richard Wilbur Award.

Mr. Carper was on the Conservation Commission in 1970. He was a selectman for the town in 1988 to 1990, a representative for Cornish on the Southern Maine Regional Planning commission in 1988 and 1990. He was a part of the Comprehensive Plan Committee in 2005, as well as a secretary and a trustee for the Bonney Memorial Library where he also was instrumental in the expansion of the Bonney Memorial Library.

Mrs. Carper graduated from Brunswick High School in 1953 from Brunswick, Maine and went on to graduate from Oberlin College in Oberlin, OH with a bachelor’s degree in German and French. She also earned her master’s degree at Brown University in Providence, RI in 1960.

In 1961 she was the editor of French and German books in New York for Holt Rinehart and Winston publishing company, until 1967when Mr. and Mrs. Carper moved to Cornish. Mrs. Carper proceeded to teach at Sacopee Valley High School in the French program for 32 years. While working in her career, she, like Mr. Carper, edited a book of letters of a WWII Resistance family in France. She would volunteer her time as a translator within the Cornish area. In 2016, Mrs. Carper volunteered to teach French class in association with the Bonney Memorial Library. Mrs. Carper was an advisor at Sacopee Valley High School for AFS, American Field Service for Students for over 5 years.

Between the two of them being ballot clerks for the town of Cornish, singing in the Cornish Trio, which performed Renaissance Music, at Bonney Memorial Library, in memorial services, benefit concerts, the Boston Public Radio, and in the Memorial Day ceremonies. In the Memorial Day Parade Tom drove the veterans in their 1964 Red Ramble Rogue. Tom and Janet have made an impact in Cornish and the citizens in numerous ways.

On behalf of the selectmen and the citizens of Cornish, we thank you for all the hard work, tireless efforts and dedication that you have brought to this town. 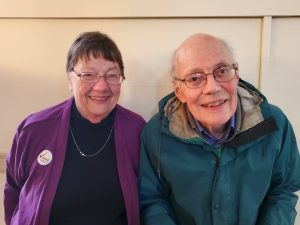